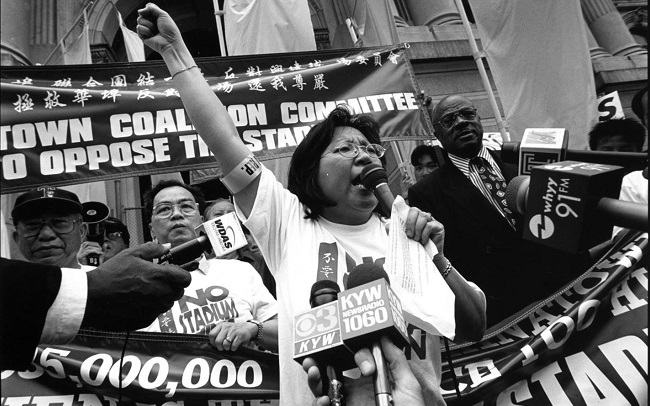 I have always believed that real, sustained change occured through collective action, not as a result necessarily of a single individual. So in 1985, we started to have small gatherings of like-minded individuals with an eye to creating an organization which would work to build a broad base to support Asian American communities in Philadelphia. We were far from a “group without a cause” – we were actually a group with too many causes to address at once and a need to define a vision.

Right from the beginning, AAU was characterized by its constant seeking to understand what it should do and why it should take the actions that it finally decided to take. As I recall, we spent nearly six months just thinking up a name that we could all live with and another six months developing broad principles which we believed in. But that initial work was important in setting the tone of the organization and for giving us all common ground around which to act. Our principles defined our work to be among the most disenfranchised sectors of the Asian American community in Philadelphia. They required that we excerise bold, outspoken leadership on critical issues.

At the time, the major area of concern for us was the rising tide of anti-Asian violence nationally and in Philadelphia in particular. That situation had gotten so bad that the Philadelphia Human Relations Commission called for a series of meetings to address the anti-Asian violence. But AAU decided early on that it was the institutional failures in the City which needed to be addressed if we wanted to get to the root. The Human Relations Commission itself had no Asian commissioners and no Asian staff. The School District had very little support for Asian students and their families and the programs which were in place were dismal in their failure to meet students’ needs. The Police Department lacked bilingual staffand a program to deal effectively and competently with the Asian communities’ concerns. In fact, the Police Department in Philadelphia was found to be the source of much of the violence.

Under these conditions, AAU found itself fighting battles on a large number of fronts and searching desperately to develop leadership witin the ranks of the Asian American community. In 1986, we began to develop a vision for a youth program. What resulted was the Summer Pilot Project – later to become the Community Youth Leadership Project.

AAU was working to organize Southeast Asian tenants in the Admiral Court apartment complex at this time. There were serious questions facing us as to how to organize across so many ethnic and linguistic lines. We developed the Summer Pilot Project because it could address a wide range of issues. We could provide a service through the tutoring program for children who were tenants in Admiral Court, helping to develop stronger links with the families there. We could, through the school experience, help parents begin to sense a degree of unity so they could organize first for their rights as tenants, and then for their rights as parents. We could develop indigenous leadership among the high school and college age youth we hired to tutor kids. Finally, through the evolution of our own school program, we could begin to develop a strategy to address educational reform issues.