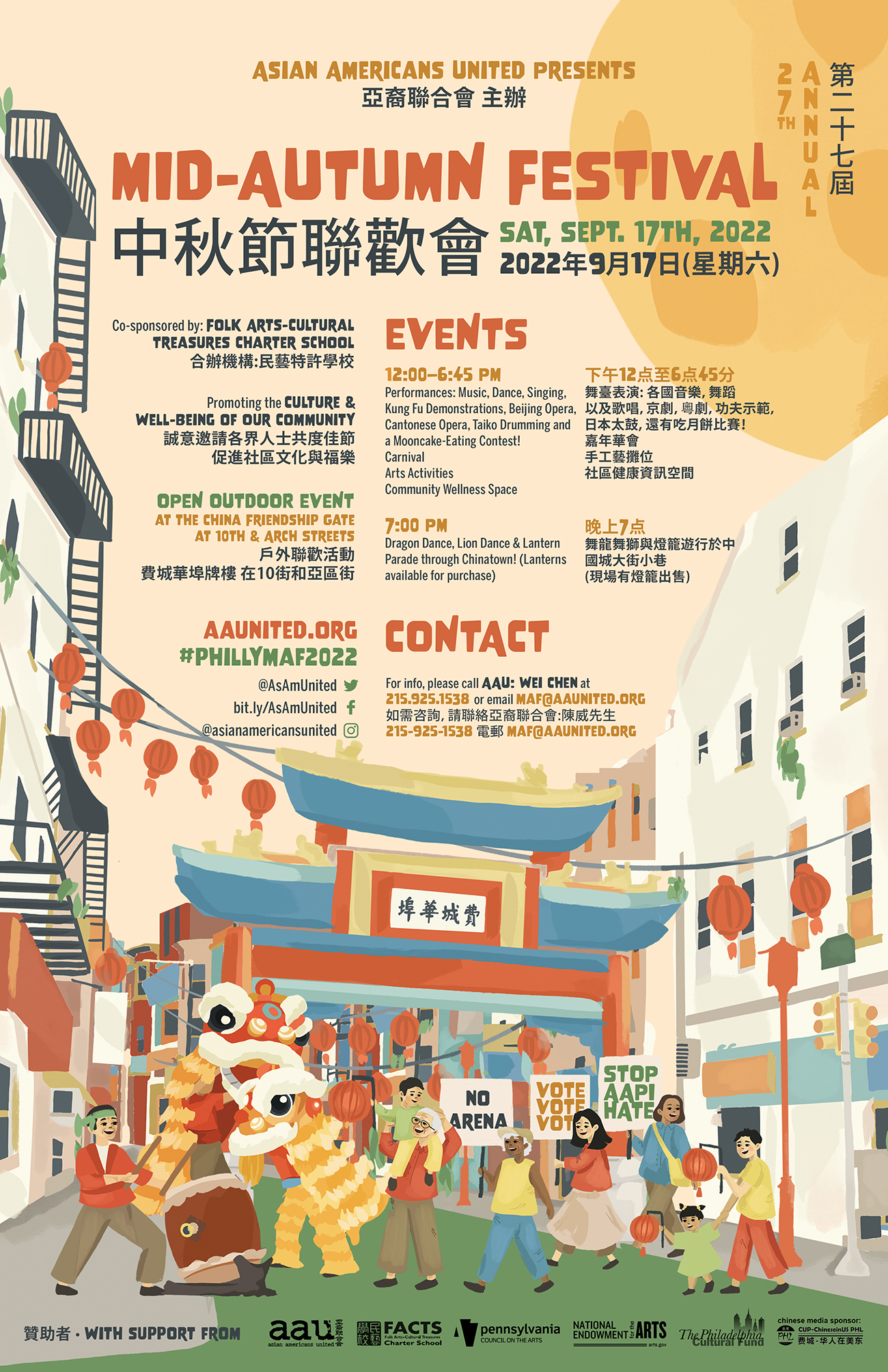 To volunteer, please complete our sign-up form at bit.ly/mafvolunteers
To learn more on how to become a sponsor or have a table at the Mid-Autumn Festival, please email maf@aaunited.org

In Chinese culture, there has always been a fascination with the moon. In ancient China, the moon was seen as a source of life because plants were seen glowing under the moonlight, and as such the moon became connected in many facets of Chinese culture. This lead to familial traditions such as moon-gazing and having feasts in response to the end of the harvest season. According to legend, Emperor Xuanzong explored the Moon-Palace, and afterwards started to host formal celebrations. After some time, the Mid Autumn Festival became associated with other traditions and objects such as lanterns and mooncakes. The holiday has become very popular throughout Asia, and is a favorite tradition for many.

As Asian Americans acclimate into a new country, there is not as much of a focus on the holiday. Since parents work, there is not enough time to cook a large feast, and even the number of stores that sell mooncakes have dwindled. As Zen Vuong puts it, “As a child, I didn’t know anything about the Mid-Autumn Festival. Mooncakes magically appeared once a year.” AAU’s Mid Autumn festival started as a way for homesick Chinese Americans to partake in celebrating a holiday that they would have had back in China. It is important that the tradition continues so that Asian Americans can place some priority into cultural traditions that are at risk of fading away.

This homegrown festival was initiated in 1996 by AAU middle school students and is a large annual event in Chinatown, actively involving more than 200 high school volunteers and reaching 5,000 festival-goers who gather under the full moon to celebrate. Closing down 10th Street, community members reclaim old traditions and establish new ones in an expression of community pride and collective responsibility. Youth give a day of service, restaurants donate food, artists offer their talents, businesses and organizations chip in money – hundreds of people work together to make the festival our own.

The core leadership of this festival is now young adults and youth who have come up through the festival starting as child attendees and/or one-day high school volunteers and growing into positions of increased responsibility. CYOP and AAU Summer youth leaders also continue their involvement with AAU through the Festival Coordinating Committee. This core of young people and young adults meet twice a month for seven months leading up to the festival day and are coordinators or co-coordinators of all aspects of the festival (e.g. stage, volunteer coordination, carnival, fundraising, arts activities, media etc).

Goals of the Mid-Autumn Festival (Written in 1996)